What is the MOH? 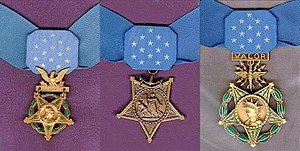 The Medal of Honor is the United States of America's highest and most prestigious personal military decoration that may be awarded to recognize U.S. military service members who distinguished themselves by acts of valor. The medal is normally awarded by the President of the United States in the name of the U.S. Congress. There are three versions of the medal, one for the Army, one for the Navy, and one for the Air Force. Personnel of the Marine Corps and Coast Guard receive the Navy version. U.S. awards, including the Medal of Honor, do not have post-nominal titles, and while there is no official abbreviation, the most common abbreviations are "MOH" and "MH". The Medal of Honor is the oldest continuously issued combat decoration of the United States armed forces.