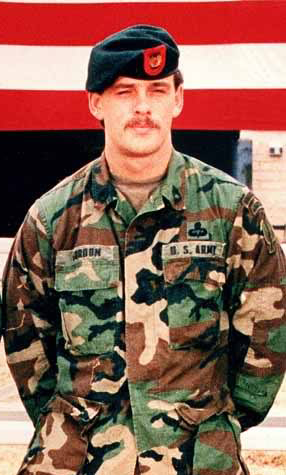 On October 3rd, 1993, MSG Gordon, while serving as sniper team leader, volunteered to be inserted into the crash site of a downed helicopter that was undergoing intense enemy fire. Despite being denied at first, MSG Gordon insisted on providing aid and was eventually granted permission to assist. Equipped with only a sniper rifle and a pistol, he and his fellow sniper, SFC Randall Shughart, fought their way to the injured helicopter crew and established a perimeter, leaving themselves in the most vulnerable position as they protected the pilot and crew. They fought valiantly until their ammunition was all but depleted. SFC Shughart was fatally wounded. MSG Gordon recovered a rifle with the last five rounds of ammunition from the helicopter and handed it to the pilot with the words “good luck”. MSG Gordon was then also fatally wounded. His actions saved the pilot’s life. MSG Gordon was posthumously awarded the Medal of Honor for these actions above and beyond the call of duty.